Visceral Mask of the Haemophile 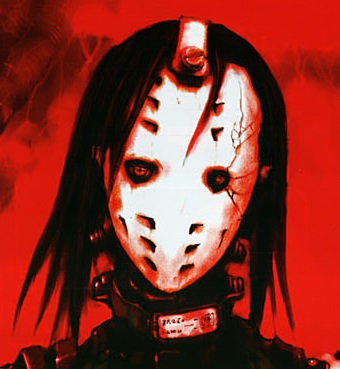 A relatively unknown slasher at an unknown point in time, the person- no, the -monster- that was turned into this mask was clearly incredibly powerful, as a sinister, purely malevolent aura is -exhumed- from this mask, making anyone rightfully wary to even hold it, let alone wear it. The monster in question was, unfortunately, nameless. Or at least, no one knew its name. All that they knew is that it lurked in the darker corridors of the Megastructure, waiting for engineers or explorers to venture in deep enough, where it would kidnap and perform unspeakable acts upon their bodies, wading through the pool of rotting viscera and blood that accumulated in its lair for months. However, luckily enough for the residents of the Megastructure, one day the killings simply… stopped. This was due to the slasher managing to slip in its own lair, knocking over a heavy piece of piping from the ceiling due to the poor maintenance in the area, and being pinned underneath the surface of the vile pool, drowning in the shit and gore of its home. However, the slasher didn't want to give into death just yet. Even in death, it didn't give up that desire, and quickly became a Geist because of it. Of course, as soon as those who could detect it found out about this Geist, they moved quickly to exterminate it for the safety of the Megastructure, killing the Geist and reducing it to a mask resembling the one it wore in life.

In appearance, it is a simple, white porcelain mask vaguely resembling that of a Hockey Goalie, or more fittingly, Jason Voorhees. On one side of the mask, a series of cracks and chips are visible, but not to the point of compromising the structure. Underneath it is reinforced with some kind of black metal, which attaches to the leather straps on the sides and the top of the mask, allowing it to be securely fastened to the head.

While being worn, this mask grants the Sin-Eater the Stigmata. This allows the user to have control over blood, both her own and her enemy's. This includes being able to force enemies to bleed from their every orifice, or prevent their blood from clotting, to controlling their own blood and using their blood as a portal. However, it also comes with two major ancillary effects. Whenever it is worn, mortals within 50 yards of the wearer will tend to feel a creeping, vague fear and discomfort, like one would when alone in a dark place, or when they feel they're being watched. This, of course, causes anyone near the wearer to be especially distrustful and suspicious, as the feeling points the mind towards the source very clearly.

In addition to that, the mask also has another side-effect. Due to the Slasher's intense and powerful Geist, not even its deepest, most powerful emotions were killed along with it. They still inhabit this mask, albeit relatively weakly. This causes whoever to wear this mask take on the very appearance of the Geist as it was during its time living. Assuming the very image of a terrible monster like this causes the wearer to be much more prone to cruelty, malevolence and sadism, warping their very morals with the power of the mask.

Community content is available under CC-BY-SA unless otherwise noted.
Advertisement