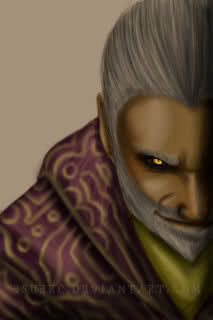 Sheogorath is the Daedric Prince of Madness. Also known as the Madgod.

Sheogorath's vessel in Rigal Prima is not indicative of his true power. The compacts made with the Aedra prevent him from fully manifesting in the realms residing in the Plane of Mundus. On Rigal Prima, he is a powerful magic user with access to a great many spells. He also has a Dark Seducer and Golden Saint hiding in his shadow that serve as bodyguards.

Community content is available under CC-BY-SA unless otherwise noted.
Advertisement