This arc began September of 2012 and was completed the same month. It was almost entirely improvised and thrown together last minute due to the unusual and unexpected circumstances.

The adventure began in a uneventful manner. Deadpony had received word that one of the Manors residents were being held captive and set out to join the rest of the group of residents on the rescue mission. While preparing to leave he met Blu Scout and together they ventured into the forest. There they encountered a wild Timber-wolf. In an attempt to pacify the creature, Deadpony threw a cryogenic grenade in a game of fetch. When the Timber-wolf returned with the grenade in mouth, it has unknowingly activated it and froze Blu and Deadpony in a prison of ice. Shortly after Andurs discovered the frozen duo and dragged them to his underground home where they were locked away in a maximum security safe set to open in approximately 1000 years. Knowing that they would be needed at that time.

After thawing out an emerging from the run down underground home, Blu and Deadpony decided to return to the Manor to find only ruins of the once impressive structure. Upon further examination a future version of Andurs (V.42), this one more level headed and focused, who had been in hiding in the Manors underground. While speaking with this future Andurs, the duo discover that in this future a group known as The Ducktators had taken control of the planet. With a large majority of the super powered beings either pacified by politics or deported back to their home universe long ago, few stood in their way. Without hesitation Blu and Deadpony knew they had to save the future, and after some convincing, Andurs 42 agreed to join them in the fight to come. While Blu remained at the Manor ruins to rest up, Deadpony ventured out in an attempt to discover possible living descendants.

When morning came the trio had a plan in place to hit the Ducktator headquarters in Town directly in order to effectively scatter their troops and allow the Rebels to systematically eliminate them later. When the trio struck the headquarters they found a literal army of rubber duck soldiers prepared to meet them. Though the trio had the fighting skill to match the numbers, it was a hard fought battle. Upon the defeat of the Ducktators super weapon, Duckzilla, the trio pillaged the trophy room and discovered the last time traveling Deloreon. Their hopes of returning home were dashed in an instant when they found that the time machine had no power source, nor could one be found among the trophies.

While contemplating how to power the Deloreon an unexpected visitor arrived. None other than the planet eater himself, Galactus. Upon declaring his desire to consume the planet another battle ensued, this one more difficult than the last, and caused the near death of Andurs 42. Knowing they could not defeat Galactus in a head on battle, Deadpony successfully removed Galactus' power source and forced him to retreat from the planet. This power source was then used to activate the Deloreon and after healing Andurs 42, Blu and Deadpony finally returned to their time.

Blu and Deadpony became good friends as a result of this adventure and also provided Blu with advanced versions of some of his equipment and weapons. Also, knowing what was to come in the future, both Deadpony and Blu are weary of rubber ducks. 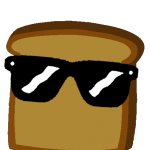