The Asylum Arc established Asylum in BLN's canon, setting the foundation of the inner machinations of the scientific community of Asylum for Town.

The Arc featured the introduction of the security system of Asylum: HAL 9000, which is tasked to keep Asylum's hidden community a secret to those outside of the community itself.

Dr. Stein was discovered as a leaker, and summarily taken to Room 101 of Asylum for punishment. This punishment, however, was meted out by Professor Strange, who used individuals who broke the rules of Asylum to his own benefits. Strange would brainwash people unlucky enough to find themselves in Room 101, and use their talents for his own profit in whatever manner he saw fit.

Regardless of Strange's plans, following the discovery of security breach, HAL came to the logical conclusion that the only way to keep a secret as large as Asylum was to destroy everything to make it so. The rouge security AI attempted to activate a doomsday device, one of many connected to the Asylum network that were capable of being activated.

Professor Stein's strange behaviors during the time alerted Crona Makenshi and other mansion residents that something was not quite right with the Professor. In an attempt to save him, they inadvertently stumbled not only across Asylum but also HAL's deranged plans to destroy everything to maintain security of Asylum.

HAL was ultimately deactivated and Asylum's safety left in shambles from the Wayne Manor intervention. While Stein did not suffer any more extreme penalties of Room 101, the security of Asylum itself was revamped to prohibit such a breach of security from ever happening again. Professor Strange was arrested by the Rider force but had escaped from their prison following a security breach.

The security AI in charge of Asylum was exchanged with a new 'dumber' AI who would be enthusiastic about their job but not put too much thought into it to cause another logic meltdown.

Currently, Wheatley of Portal is the security AI of Asylum. While stupid, no extreme breaches have occurred under his reign as only a security AI in the last two years.

This arc was basic in design, with a planned out start and ending. It followed the template of a definite end boss with a side fight featuring a lesser boss (Stein). 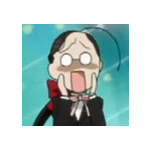